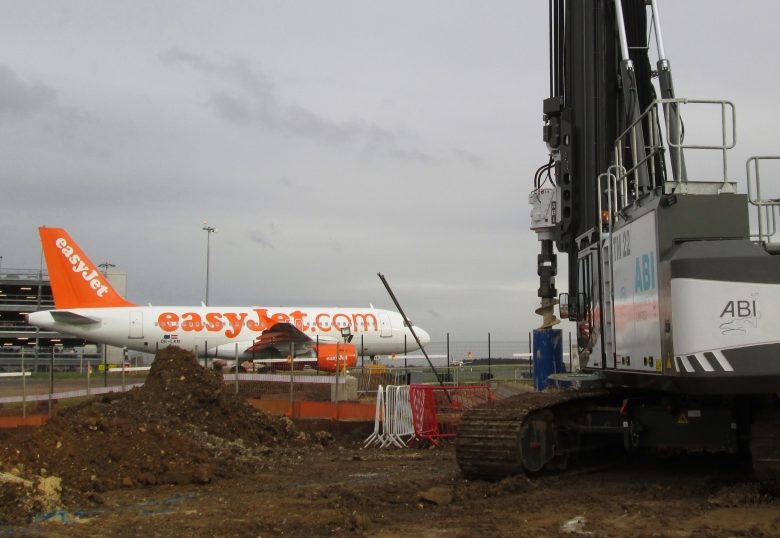 The footage below is a project update released recently by London Luton Airport, showing the progress so far with the Luton DART construction.

Luton Airport is undergoing a huge programme of improvements and expansions as air passenger demand in the area booms. Part of these improvements include the build of a light railway shuttle between Luton Parkway railway station and Luton Airport passenger terminal. This double shuttle will operate 24 hours a day, 7 days a week, and it is forecast that this improvement in transport links will make the airport more accessible, to more people, from a wider catchment area.

The first half of the video sequence clearly shows the steel sheet piling in situ that was installed recently using our fleet Mobilram TM22. This rig was used by VolkerGround Engineering at 3 sites along the DART route. The first site is the Central Station, the DART terminus at the airport end, and with the main pedestrian access running alongside it, it was the most sensitive area in terms of noise and vibration. The video then moves swiftly on to a short section of piling leading to the current Airport Approach underpass (this is known as ‘Site 14’), followed by a much longer section leading away from the underpass, parallel to the car parks. This third section is known as the Fire & Rescue site because of its proximity to the emergency services station for the airport.

This piling was carried out by our fleet TM22 telescopic leader rig, along with the use of an MRZV 36VV vibro, an MZK1200 combi clamp, and an MDBA 7000 and the associated tooling. Our involvement with this project for the time being finished in April of this year, and we hope to be publishing a Case Study about the work very soon.