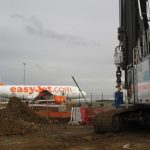 The footage below is a project update released recently by London Luton Airport, showing the progress so far with the Luton DART construction. Luton Airport is undergoing a huge programme of improvements and expansions as air passenger demand in the area booms. Part of these improvements include the build of a light railway shuttle between Read More